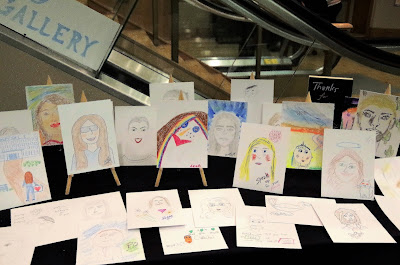 The Gaucher Community Gallery was created at the National Gaucher Foundation of Canada's 25th Anniversary Conference. Thank you to everyone who participated & helped raise awareness about the Gaucher family!

Visit gaucherportraits on Instagram to see more from our conference art making station. In the anniversary edition of the NGF Newsletter you can also read about impressions of the conference from our community.
Posted by My Normal at 8:42:00 AM 1 comment:

Skeletons at My Desk

Can an engaged patient be scared?


Why learning about advancing research into Gaucher disease and Parkinson's has left me feeling vulnerable and what I'm doing to empower myself.


Thank you to the Medicine X conference presenters who got me thinking about science and the role patients can play in moving research forward. Corrie Painter you're an inspiration!

Being a Rare Disease ePatient at MedX

Last month I attended the Stanford Medicine X conference, on scholarship, as an ePatient delegate. I've since had the chance to speak with Daniel Levine, on RARECast, about my experience, and conference topics of interest to the rare disease community.

The Challenge of Blogging While Sick 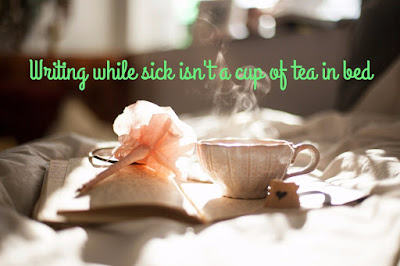 Writing while sick isn't a cup of tea in bed

Find the latest edition of the Running on Stories series at the RAREDaily by Global Genes. Join the discussion on Twitter with the #RunningOnStories hashtag.


What tips can you share for overcoming your barriers to blogging with chronic health?
Posted by My Normal at 8:20:00 AM 16 comments: 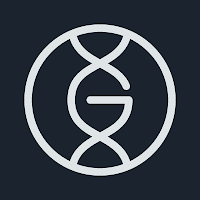 Announcement: Genome magazine is excited to partner with the National Society of Genetic Counselors (NSGC) in the inaugural Code Talker Award — an essay contest for patients and their families to honor a genetic counselor who has left a lasting impact on them. Three essay finalists and the genetic counselors they nominated will win a trip to NSGC’s annual education conference, held September 28 through October 1, 2016, in Seattle, Washington, where the award will be presented.

This is your chance to help celebrate the compassion, expertise, and helpfulness a genetic counselor has given to you, your family, or a close relative.

Find-out more and submit your story at the Code Talker website.

Announcement: Global Genes™ is proud to partner with Students Advocates for Neglected Diseases (STAND) to present the third David R. Cox Prize for Rare Compassion, an essay program that connects medical students with the rare patient community. Visit Global Genes to find out how to get involved.

Where to Promote Your Patient Story 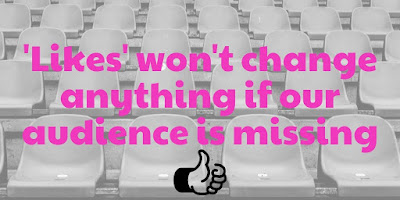 We have a tendency to think bigger is always better. So we end up putting our attention on getting the most views possible rather than directly targeting the people who could benefit from our story or using our story to effect change. At the end of the day, a large number of ‘likes’ on social media may not produce the results we are hoping for when we miss reaching key decision makers or those we set out to support.

Read the latest edition of the Running on Stories series, at the RAREDaily by Global Genes, for "3 Ways to Make the Most of Your Storytelling Wisdom."
Posted by My Normal at 10:02:00 AM 1 comment:

Recording prepared for my Stanford Medicine X ePatient storyteller track application.
Posted by My Normal at 6:37:00 AM 2 comments:

Rare Disease Day, which was started in 2008 by EURORDIS (the European Organization for Rare Diseases), has grown to include participation from around the world. This year’s activities included a symposium in Brussels on improving access to rare disease therapies. While there are over 7,000 unique rare diseases identified, the vast majority of rare disease patients face limited to no treatment options and significant inequities in accessing care. In order to address these life threatening challenges, symposium organizers intentionally brought together stakeholders from diverse backgrounds, including patient leaders. The event focused on the European landscape but attracted a large number of representatives from outside the European Union. It has always been to the benefit of the rare disease community to collaborate globally and EURORDIS continues to lead the way, with events like the symposium and the recent launch of the Rare Diseases International (RDI) global alliance.

The Multi-stakeholder Symposium on Improving Patient Access to Rare Disease Therapies offered an inspiring lineup of speakers and panelists who eloquently highlighted best practices and broadened the understanding of what health technology assessment (HTA) means in action. Throughout the conference there were repeated calls to ensure that patients remain at the centre of developments and recognition that patient stories are critical to making good decisions in advancing therapies. The role of the Internet and new data management technologies were also promoted as key for gathering input from patients and increasing collaboration potential.

Right words aside, the inclusion of simulation exercises is what brought the themes of the conference to life. Role playing sessions involved all attendees and gave everyone the chance to practice working together on a challenge. Simulations also let participants take on roles different from the ones they are typically responsible for playing. I played the part of decision maker and got to evaluate pricing and reimbursement of health technologies on behalf of the public plan. It was a real thrill to be given a voting button and a level of power I’m unaccustomed to as a patient. At the same time, I also felt frustrated by the limited information I received to make important decisions and the time restraints placed on getting to a final decision.

Of course these scenarios were just games, but playing left me with greater awareness of the quality of input needed from patients, to ensure decision makers can take this perspective properly into account. I also thought a lot about how difficult it must be for decision makers, to open themselves, to listen to stories from patients, while knowing that they aren’t in a position to always vote in favour of what patients want and need. My takeaway from the symposium was greater empathy, for ALL the different players, working to make access to rare disease therapies viable. Patients should be at the centre but there are many voices that need to be heard, if we want to move forward together, to improve the lives of rare disease patients.

.@avrilbdaly at #RareEU2016 "Value of a medicine means something different to everyone, but we must keep in mind what is value for PATIENTS"
— Rare Diseases Europe (@eurordis) 25 February 2016

--
If you missed the #RareEU2016 symposium, you can now watch the recording on YouTube. You can also access the one hour webinar that was offered pre-symposium as a practical introduction to health technology assessment (HTA).
Posted by My Normal at 6:00:00 AM 6 comments:

A Story of Rare Disease Activists

Celebrate the patient voice for Rare Disease Day with perspectives from activists, including My Normal founder Emma Rooney, on what it means to live with a rare disease and advocate on behalf of the community.

12 activists share what they want you to know about living with a rare disease https://t.co/P3Lk3ZDnxx pic.twitter.com/GQE7YRnPdD
— Mashable (@mashable) 29 February 2016 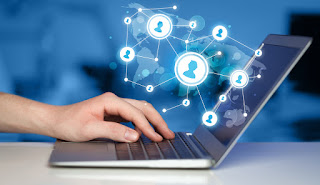 The My Normal Project is pleased to announce the launch of the How to Promote Your Rare Disease Story Through Social Media RARE Toolkit. My Normal is a proud content provider for this Global Genes resource.

The new Toolkit complements the Using Storytelling title but goes one step further by helping storytellers bring greater awareness to their personal journeys by taking advantage of social media. This Toolkit focuses on the value, use, and practical application of social media to promote our stories and can be viewed free online and downloaded.
Posted by My Normal at 7:21:00 AM No comments:

Storify: Do stories change anything? 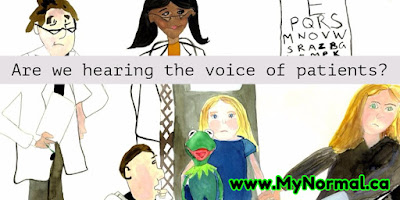 If you missed taking part in the February 3rd #hcsmca Twitter Chat on storytelling + preparing for Rare Disease Day, or you're looking for a recap of the lively session, visit the event storify. It offers a great capture of why patient stories are so important and some of the challenges we must overcome to guarantee we are making the most of what stories have to offer. You will also find links to a number of relevant resources shared by participants.


@drpauldempsey 20 years ago, my story didn't matter, I was told what to do. I love the change now since I'm asked what I need next. #hcsmca
— Martin R. Lemieux (@martin_lemieux) February 3, 2016

Chat contributors fully embraced the topics up for discussion:


Full chat transcriptions also available from #hcsmca
Do stories change anything? #hcsmca storify
Posted by My Normal at 9:28:00 AM No comments:

Less than 20 days to go, we're on countdown until Rare Disease Day 2016. The 2016 official video has now been released and it reminds us that while the goal of Rare Disease Day is to draw awareness to the plight of people living with rare diseases, it's also an important time to celebrate the voices of the rare disease community. Don't miss this year's production starring pianist Elisa, who lives with Williams Syndrome, and her family. If you're searching for a movie for Valentine's Day, also look out for the French Canadian romantic film Gabrielle. The film's leading lady, Gabrielle Marion-Rivard, also lives with Williams and brings this rare story to the big screen with a charming performance. 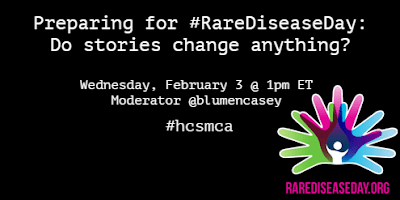 Join the #hcsmca weekly chat on Wednesday, February 3rd at 1pm ET (time zone converter) to discuss how stories can change things.
In the chat we will cover:
Learn more about this #hcsmca twitter chat: Preparing for #RareDiseaseDay: Do stories change anything? by Emma Rooney (@blumencasey)
Posted by My Normal at 9:00:00 AM 6 comments:

We've started a list of Rare Disease Patient Stories from around the world. Help get ready for Rare Disease Day by visiting the list and adding your suggestions.

View more lists from Emma Casey Rooney
Posted by My Normal at 2:30:00 AM No comments: